The world wide web is “still in its infancy”, the web’s inventor Sir Tim Berners-Lee has told BBC News. 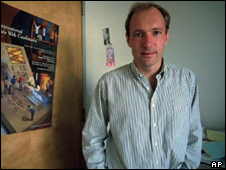 If the web is in-fact in it’s infancy, which I believe is a true statement.  We as web development companies are either (1) in a lot of trouble because it is only going to get more complicated or (2) we have jobs for life, and we should embrace the revolution.

“Robert Cailliau, who worked alongside Sir Tim. The decision by physics laboratory Cern to release the web code into the public domain was not a straightforward one, he told BBC News.

Mr Cailliau helped draw up one of the early technical proposals for the web and later helped convince the directors at Cern to “give the web away”. “The difficult part was explaining to them the true nature of what the web was going to be,” he said. “We had to convince them that this was going to take off and it was a really big thing. And therefore Cern couldn’t hold on to it and the best thing to do was to give it away.” He added: “We had toyed with the idea of asking for some sort of royalty. But Tim wasn’t very much in favour of that.”

He said competing technologies, such as Gopher, which was developed at the University of Minnesota, were also offering a method of using hyperlinks to connect documents across computers on the Internet. “If we had put a price on it like the University of Minnesota had done with Gopher then it would not have expanded into what it is now. “We would have had some sort of market share alongside services like AOL and CompuServe, but we would not have flattened the world.”

352 is an innovation and growth firm. Leading companies hire us to find billion-dollar opportunities, build killer new products and create hockey-stick growth. We bring grit and new-fashioned thinking to innovation, digital development and growth marketing.
Back to Perspectives